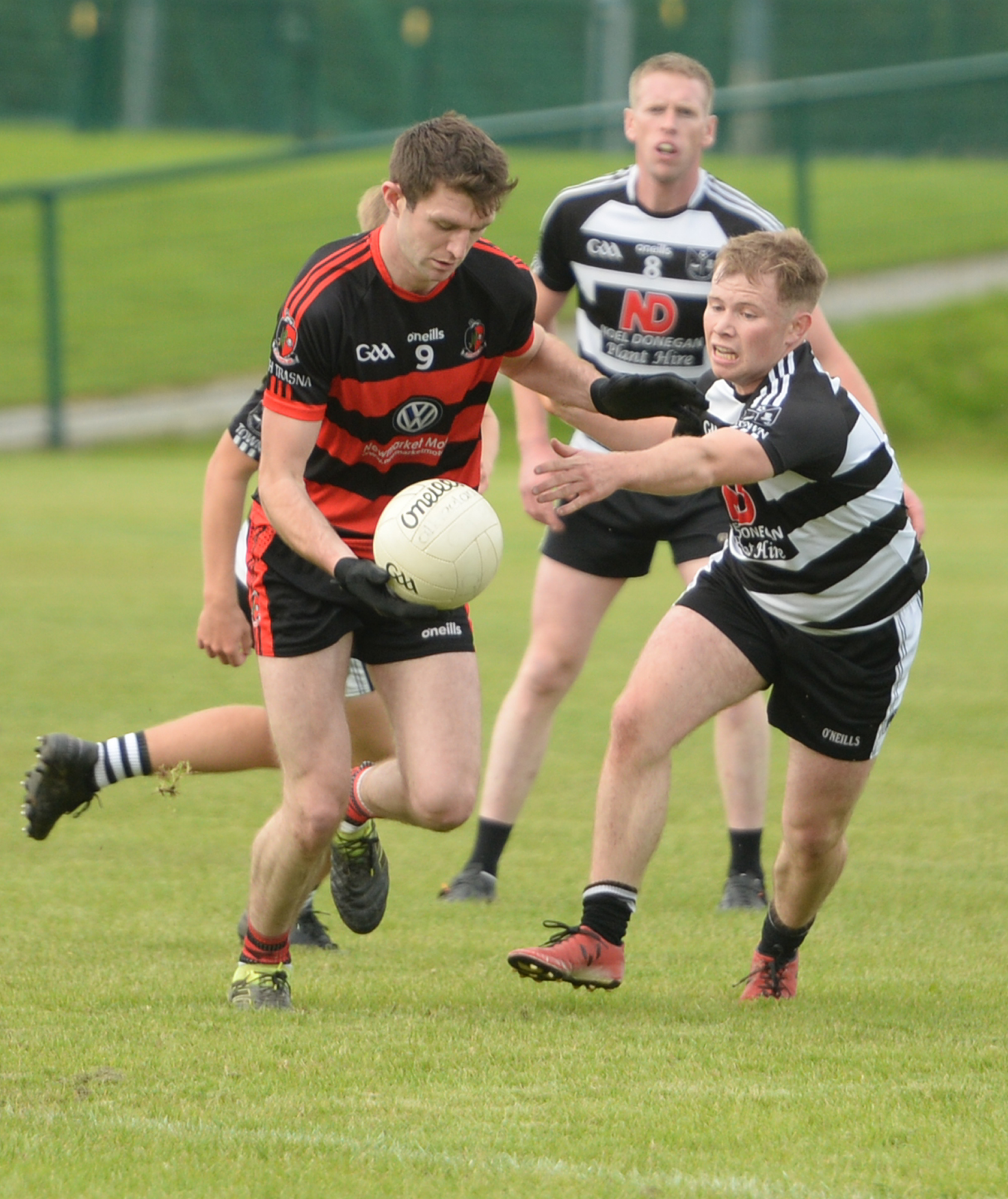 Disappointment for Kiskeam on a defeat to  Éire Óg  in a competitive contest at Glantane. Entering the fray with two wins to their credit, scoring aggregate denied Kiskeam advancement with Éire Óg and Mallow taking quarter final positions.

A perfect start for Kiskeam to register the opening four points but once Éire Óg settled, they took a grip and two Daniel Goulding goals helped build a 2-7 to 0-6 advantage at the interval.   Kiskeam passed up goal chances before Seán Meehan netted a late consolation.

Newmarket staked their  claim into a semi final thanks to a top of the table victory over Castletownbere.  The Duhallow side looked the more assured side and earned a boost from goals to  Daniel Culloty and Ryan O’Keeffe.

CTB answered with a goal from Gary Murphy to trail 2-9 to 1-4 at half-time. Newmarket regained the initiative on the restart, Darren O’Keeffe netting a third to earn Newmarket a direct passage to the penultimate hurdle against Knocknagree or Nemo Rangers.

Kanturk delivered a powerful display to earn an emphatic victory over Gabriel Rangers at Ballingeary. That impressive margin allowed Kanturk steer just ahead of Macroom to finish runners up behind Nemo Rangers in the Group.

First half goals from Kyrle Holland, Liam O’Keeffe and Alan Walsh pushed Kanturk into the ascendency to hold a 3-7 to 0-5 grip by the interval. Much a similar pattern continued, Holland netted a second for Kanturk  to secure a ticket to a quarter final against Aghada.

Cill Na Marta carved out a runaway victory over Knocknagree at Mourneabbey yet both sides advance to the knockout phase. Not surprising the Gaeltacht side advance to a semi against Kanturk or Aghada with Knocknagree sure to be keen to address this below par showing against Nemo Rangers.

Millstreet’s unbeaten run in Group A came unstuck on a narrow defeat by Glenville. Still ample compensation for the Duhallow side to advance to a quarter final with Aghabullogue.

Millstreet shaded the opening half and a Padraig Moynihan goal earned a 1-6 to 0-5 advantage at the break.  Glenville came more into the picture after the restart to gather parity, it remained close to the finish only for a late goal from substitute P J Dennehy eased relegation fears for Glenville.

Rockchapel survived a late Ballydesmond onslaught  to top Group B and advance to meet Ballinora in a quarter final. The victors hit the ground running to shoot the opening seven points from Mike McAulliffe, Seamus Hickey and Jack Curtin before Ballydesmond rallied to trail 0-12 to 0-4 at the break.

Though Rockchapel added to their tally, Ballydesmond kept up the pressure  right up to the last play, Donncha O’Connor’s converted penalty  boosted their scoring aggregate and ensured Ballydesmond avoided the relegation playoff.

Dromtariffe forfeited a 10 point advantage to slip to a narrow defeat to Kinsale in Group B at Kilmurry. Both sides required a return from the contest, Kinsale's recovery rewarded with a quarter final and end of road for Dromtariffe.

First half goals from Evan Murphy and Conor Cremin pushed Dromtariffe into a commanding position only for Kinsale to rally and trail 2-7 to 1-3 at the break. The impetus remained with Kinsale on the restart and in a late frenzy, a pair of injury time points swayed the outcome in favour of the Harbour side.